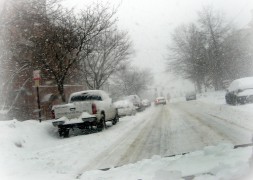 There are 10 rules of winter driving. Â Don’t get intimidated, they are really easy to understand and remember. Â I’ll even help by providing a reason why each of the ten rules should be followed.

Well, in my observations, most of the time people end up in a ditch or in an “accident” because they had to do some panic braking because they were following too close to the car in front of them. Â A couple days ago I observed as groups of cars would drive down the highway, only a few feet from each other. Â As one driver touched his brakes, the trailing vehicles would all slam their brakes on harder because they suddenly realized it was slippery conditions. Â Eventually, one of the trailing vehicles spins out and ends up in the ditch because they have discovered one of the laws of physics really does apply to them.

Now, don’t get me wrong, I’m not a “conservative” driver. Â I’m probably the guy passing you in the left lane on a snowy day, even without snow tires! Â **gasp** What I won’t be doing is following too closely to the car in front of me.

Which brings us to rule number 10. Â Turn your lights on so that your tail lights are also on. Â I could care less about the front end of your car when we’re driving in the snow. Â I’m more interested in the front end of my car. Â When you turn your tail lights on, it provides trailing drivers a visual cue as to where you are. Â They can see you through the snow before they will be able to see your vehicle. Â In a sudden white out condition, this can make a huge difference. Â I can judge my following distance based on your tail lights so I’m not suddenly on top of you as you slam your brakes on due to the white out.

Rick Mercer’s Blog: Children are the Future but Beer is now.