At 2PM today, the official temperature here is only -21Â°C. Â Of course the sliding door latch on our 2009 Dodge Grand Caravan would freeze today. Thankfully, it’s not the locking mechanism (or we’d spend the rest of the day emptying the van of it’s contents so no one else would over night!) but just the front latch. 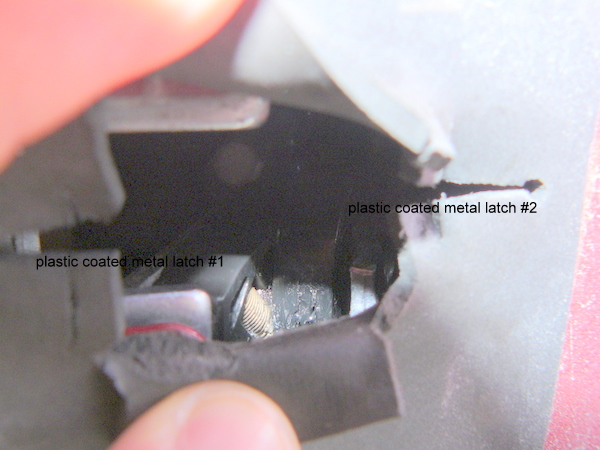 After I poked at the ice and removed a fair bit, you can see that the first latch appears to be back in the right position. Â The second latch is still rotated in an locked, or partially locked, position. This prevents the sliding door from closing completely. Unfortunately, as you can see, the plastic coating on the second latch took a beating the first couple times we attempted to close the door. Â Ooops! By the time I took the picture above after removing the ice, the second latch has started to rotate downwards into what I assume should be a similar position as the first latch.

I’m going to dig out a heat gun and try and melt the remaining ice in there in hopes it will allow everything to return to the correct position. Â Then I get to cross my fingers and hope it doesn’t refreeze overnight when our forecast low is -30Â°C.