Time of Use and your Base Electricity Usage

It’s been almost two weeks now since Hydro One switched us to the new Time of Use billing for our electricity usage. So far, we’ve been doing pretty good at keeping our heavy usage in the off-peak times. That’s mostly running the washer, dryer and dishwasher after 9PM.

What is more difficult to control is the base electricity usage in you house. That is the electricity that you need to run things like your fridge, deep-freezer, furnace, and any other “always on” devices that are required for the “proper” operation of your house.

What is your Base Electricity Usage?

We just happened to be on vacation and I was able to capture the following information from the Hydro One tool for one of the days were were gone. 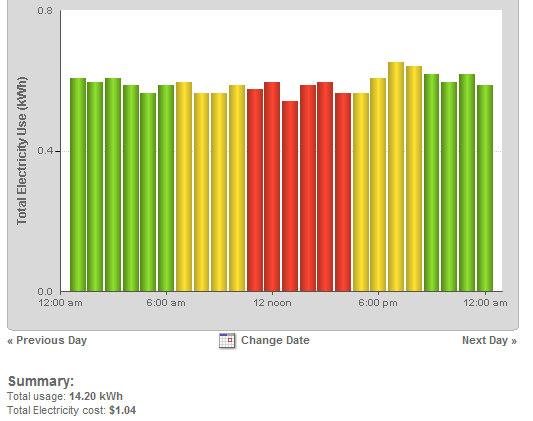 Graph from Hydro One Time of Use Portal showing our base electricity usage before conservation efforts.

As you can see, we were using 14.20kWh for a day when no one was in the house, no heating was happening and no AC was on. That’s an average of 592Watts per hour! Needless to say, that is a rather high base electricity usage for when no one is around. As I mentioned in a previous post, before Time of Use pricing started, we paid approximately $0.122/kWh (plus HST) which means our total cost for a day with no one home was $1.96, or ~$715 a year!

Now, I knew something was really wrong with that average of 592Watts per hour so I got my trusty power meter out and started trying to determine what was consuming so much power. At first I was going to check the fridge and deep-freeze but then I realized that unless I’m going to replace them, there’s not much point. That will probably be a not-too-distant-future plan.Â  So, I focused on other items that consumed power and were left on while we were on vacation.

Now, the dehumidifier and HRV are sort of necessary but they don’t need to run 24/7. I unplugged the dehumidifier (after seeing the 150W it consumed) and I also turned off the HRV. This is sort of a temporary thing which I will get into a little later.

As I mentioned in my Woods SmartStrip power bar saves money post, I installed a new “smart” power bar on the “TV center” and cut ~68W of our vampire power.

Looking at a recent day in the Hydro One Time of Use Portal, I have now reduced our base electricity usage to approx 280Watts per hour.Â  There is still some room for improvement but 280W/hour is approximately $340/year or a real savings of $375/year just but turning some stuff off when it’s not needed.

I know my base electricity usage – now what?

Well, with Time of Use, there are three tiers which have different electricity rates. Knowing what your base electricity rate is allows you to calculate how much it’s going to cost you to run your house, excluding all of the other add-on stuff. Using my own home/location as an example, and looking at the winter Time of Use tiers (BTW they start today November 1st), I calculated our average price to be $0.131058/kWh (plus HST).

Our 280W base electricity usage now turns into $363/year. That’s not too bad – it’s basically $30 a month to run our basic electrical items. Remember that this number doesn’t include stuff like lights, heating/cooling, TV, computers or any other “on-demand” items.

Knowing what your base electricity usage is allows you to make more educated decisions on turning electrical items on/off.

That brings us back to the HRV and dehumidifier. We don’t need either to run 24/7. The week day off-peak period is 10 continuous hours at an adjusted cost of $0.107558/kWh. If I only allow the HRV to run during off-peak time then the incremental cost would be $70/year. If I let it run 24/7 it would be closer to $200/year. This can be achieved with a simple, properly rated, electrical timer.

The same can be done with the dehumidifier (and any other similar types of loads – like pool pumps or heaters, etc.).

NOTE: I haven’t actually done this yet. I plan on getting a timer soon and checking to see what it’s own electrical consumption is.

Anyways, the gist of this entire post is that you can only reduce your electricity bill by so much. We could definitely get a newer fridge and deep freeze that would consume less power and lower our base electricity usage but then we need to consider the initial cost of replacing those appliances. It could easily be in the $2000 range and since our base electricity usage is currently in the $360/year range, those appliances would take a rather large number of years to pay back in energy savings. That said, if either appliance needs to be replaced, one major deciding factor will be the energy consumption of the replacement unit.

15 thoughts on “Time of Use and your Base Electricity Usage”