May 1 is the start of the summer season for Time of Use electricity rates in Ontario. For 2011, this brings one good change and one bad change.

Let’s start with the good change – the off-peak rate now starts at 7PM instead of 9PM.Â  This is a huge deal for us as the majority of our electricity usage is after 6PM. In the winter season, that was bad because the on-peak time was from 5PM to 9PM. At least in the summer, 5PM to 7PM is mid-peak so there’s a minor reduction in electricity rate. I think the extended off-peak will help a little more in the winter season. 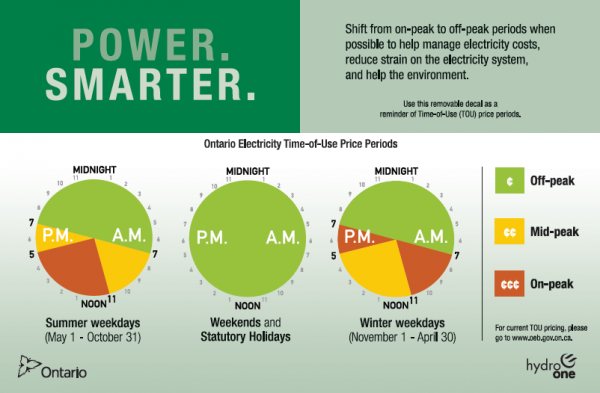 Now for the bad change – the rates at all levels have been increased by 0.8Â¢/kWh vs the rates we were paying in the 2010 winter season. So now instead of 5.1Â¢/kWh, we will be paying 5.9Â¢/kWh. That’s an increase of a whopping 15.7%. Ouch! So, even if you’ve managed to move most of your usage to the off-peak times, your bill is going up. Your base electricity usage cost is going to increase.

Wasn’t Time of Use supposed to make it possible for consumers to save money? Hydo One has updated information on their Time of Use Prices web page.

So, what are your plans this summer to try and beat the heat while not breaking the bank.Â  I’m all ears and would love to hear your ideas!

Time of Use and your Base Electricity Usage
Tags:electricityenergy savingOntarioTime of Use