With the recent catastrophe in Haiti, there’s been a whole lot of requests for donations to help out. I was really impressed to see that the American Red Cross setup a way to donate simply by text messaging (text HAITI to 90999 to donate $10). Unfortunately, for those of us in Canada, it doesn’t work.

Virgin Mobile Canada sent me a text yesterday to indicate that I could donate $5 to the Salvation Army for Haiti by texting HAITI to 45678. This is fantastic.

There’s one more way I think Virgin Mobile could help. We recently (on January 12th ironically) let one of our pre-paid Virgin Mobile phones expire. This was because we no longer need it.  The kicker is that the phone still had pre-paid minutes on it which end up just staying in Virgin Mobile’s pocket.

I think it would be really fantastic if Virgin Mobile would let us donate our recently expired pre-paid balance to help Haiti.

I’m not trying to make Virgin out to be some bad, uncaring company, I just think it would be really nice for them to allow this to happen.  Had there been a way to send a donation to some Canadian aid organization via text message on January 12, I might have sent enough to use up the majority of the pre-paid balance.

Update: I was hoping to be able to post an update that Virgin was going to donate our expired minutes but, I can’t. Unfortunately, over a week later, I haven’t even received a response from Virgin even though they claim to respond to everything within 48 hours.

The Spirit has gone to heaven! Finally!

Some of you may recall the old Dodge Spirit that we’ve had kicking around in our driveway for a couple months now. It had become the new home and walnut storage for the damn squirrel this fall. The reason we had kept it for so long was that the tires on it were pretty much brand new and exactly the same size as the Pontiac Sunfire that we bought to replace the Spirit. It took us a while to track down some replacement bald tires for the Spirit.

Once we got everything fixed up with the tires, we contacted Car Heaven and arranged for them to come collect the Spirit. Car Heaven is a pretty neat program because the car ends up being disposed of in an environmentally safe way. Also, the proceeds of anything that can be stripped and sold from the car are donated to one of the charities involved in the program (you can pick the one you want).

And here is the Spirit on it’s way up the stairway ramp to heaven! 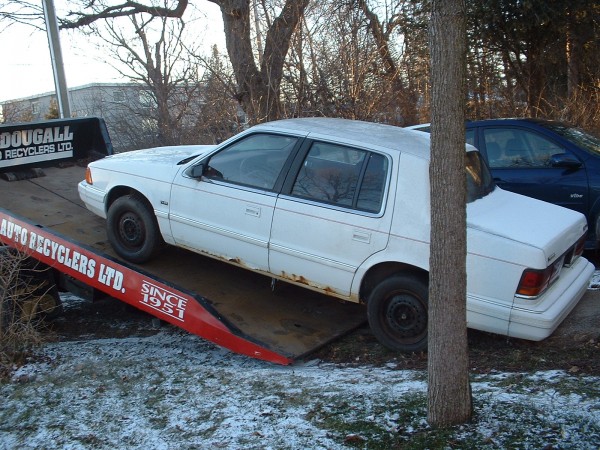 Here is our Dodge Spirit getting hauled away to Car Heaven

Finally the Spirit is on it’s way and no longer taking up space in our driveway. Yippee!

There goes the old Dodge Spirit to Car Heaven