I finally got around to getting a new pair of shoes last week – a pair of Blundstone boots. My old crappy shoes with the cracked sole and holes gave me wet feet one last time and that was then end of my misery. ;)

I wasn’t initially sure if I really wanted the Blundstone boots for two reasons:

The first problem was quickly addressed when I pulled a pair on. I used to wear boots all the time back when I was a slightly rebelling teenager. I had a couple pairs of Doc Martens that lasted me many years. It’s sort of strange how much more comfortable boots can be. I like them because I don’t have any rubbing in my heel/ankle from the top of a shoe. 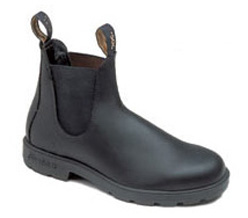 Anyways, back to the Blundstones – they aren’t cheap. My last pair of shoes cost me at least $50 and the Blundstones were almost 4 times that. Now, what I’m banking on is that the Blundstone boots will last at least 4 times longer than the shoes did. The shoes only really lasted a year but I squeezed 6 months more out of them (such a bad idea!).

Buying the Blundstone boots was an interesting adventure. First, I wanted to buy them locally in Kemptville but the one shop that has them doesn’t have very good hours. Tough luck for them.

I ended up searching on the Blundstone website for Ottawa and found a store at Bayshore than had them. After trying some on and getting what I thought was the right size, I bought them and drove home. At home I wore them around the house for the evening and it became painfully obvious that they were too small.  What had happened is that particular store did something funny with their inventory. The Blundstone boots are in UK sizes which are about 1 size smaller than US sizes. No problem normally. What was a problem is the store had the UK size 10 listed as a size 10 but the UK size 8.5 they listed as a size 9.5.  They didn’t actually have any UK 9.5 or UK 9 at all, even in the computer. Anyhoo, I had to return the UK 8.5 boots I bought.  Just too small.

Going back to the Blundstone website, I discovered that they still have Ottawa broken down into Ottawa, Kanata, Nepean and Orleans – with different stores listed for each search option! Turns out there was a second store in Bayshore that also carried  Blundstone. Back I went a second time and success! I got my UK 9.5 Blundstone boots. Interestingly enough, they were actually cheaper at that store. ;)